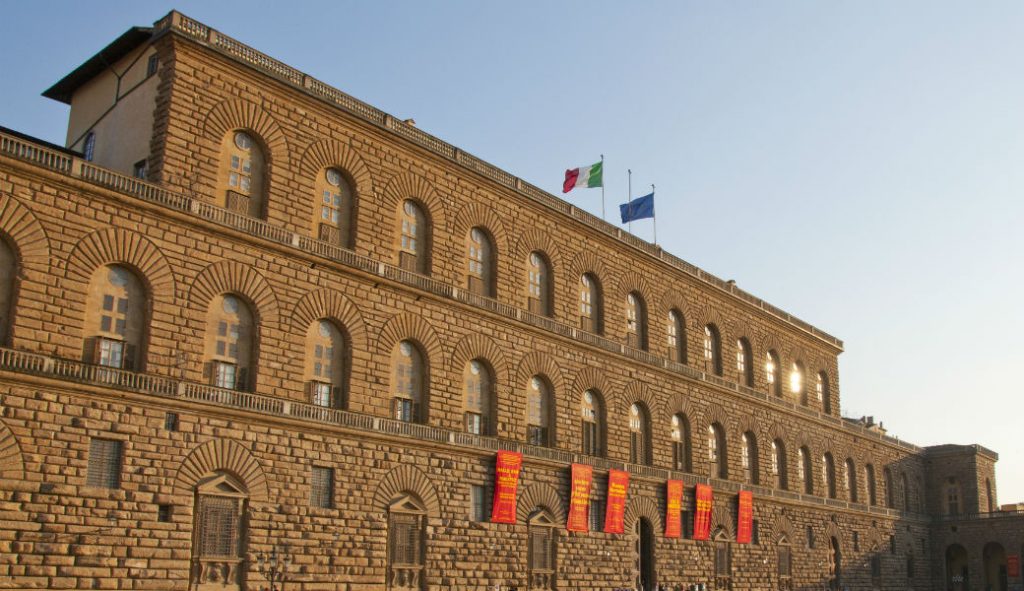 There’s no way of passing by Palazzo Pitti and not noticing its magnitude, worthy of the power and strength of the Medici family, who ruled Florence for almost 300 years. The Palace was not made for the family, though: the project by Filippo Brunelleschi was built in 1440 for the merchant Luca Pitti. At this time, the building was not sumptuous as it is today. It had only three large doors and a double row of seven windows on the façade. 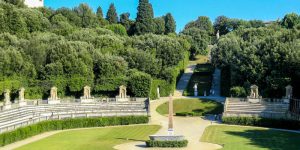 After the death of Luca Pitti, the Palace was purchased in 1549 by Eleonora of Toledo, Cosimo I de’ Medici’s wife as a ceremonial residence. The main front was extended by Bartolomeo Ammannati, and the Boboli Gardens were created to become the model for royal palaces throughout Europe.

The will of the Medici of showing their power was even bigger than their obstinacy to get power, reason why they wanted not only the biggest palace of all but also to surround themselves with the best artists of that period and their artworks. The Palace was enriched with baroque halls and became the main residence for the King of Italy.

All this pomp and circumstance caused enmities, and the Medici found it was better to foresee possible attacks of public opinion, not just verbal, but to their physical integrity as well. And it seemed a great idea to have a corridor connecting Pitti Palace with Palazzo Vecchio – the Town Hall. So, the Vasari Corridor was designed and built, allowing the Medici family to move freely and without risks from home to work.

The Medici Dynasty ended and the Pitti Palace went to the Crown of Italy, being inhabited by the king Victor Emmanuel II in the years when Florence was the capital of Italy (1865-1871) and was donated in the 20th century, more specifically in 1919, to the Italian State by Victor Emmanuel III, together with the square and the Boboli Gardens.

Today, it is three times the original size – the largest of the Florentine Palaces!!! – and houses a great museum complex:

The Treasury of the Grand Dukes – once the summer apartments of the Medici family, it houses semi-precious stone vases, rock crystals, ambers and ivories, and an important collection of jewellery made between the 17th and 20th centuries. 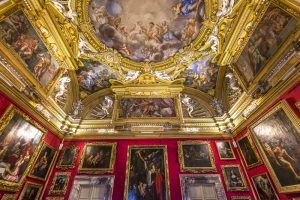 The Palatine Gallery – with its magnificent baroque rooms housing the Medici’s own private collection of more than 500 artworks, including the world largest collection of Raffaello’s artworks, and others by Tiziano, Botticelli, Caravaggio, etc.

The Gallery of Modern Art – A great collection of paintings and sculptures, ranging from the end of the 18th century until the first decades of the 20th century, which are still being added to through donations and purchases. In addition to the exceptional works of art of F. Hayez, T. Signorini, G. Fattori, C. Pissarro, among others, a magnificent view over Florence and the Boboli Gardens is a master piece. 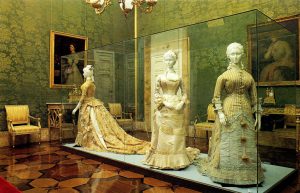 The Museum of Costume and Fashion – the first State museum dedicated to the history of fashion and its social significance is a journey through a gallery of clothes and accessories from the 16th century to the 21st. There, among other unbelievable vests, you will be able to see the 16th-century funeral clothing of Cosimo I de’ Medici, Eleonora of Toledo and their son Garzia de’ Medici, completely restored.

The first fashion shows of Pitti Immagine staged in the Sala Bianca in Palazzo Pitti, in the 1950s. Now, the runaway shows take place at Fortezza da Basso, and the next event will be Pitti Uomo, in June.