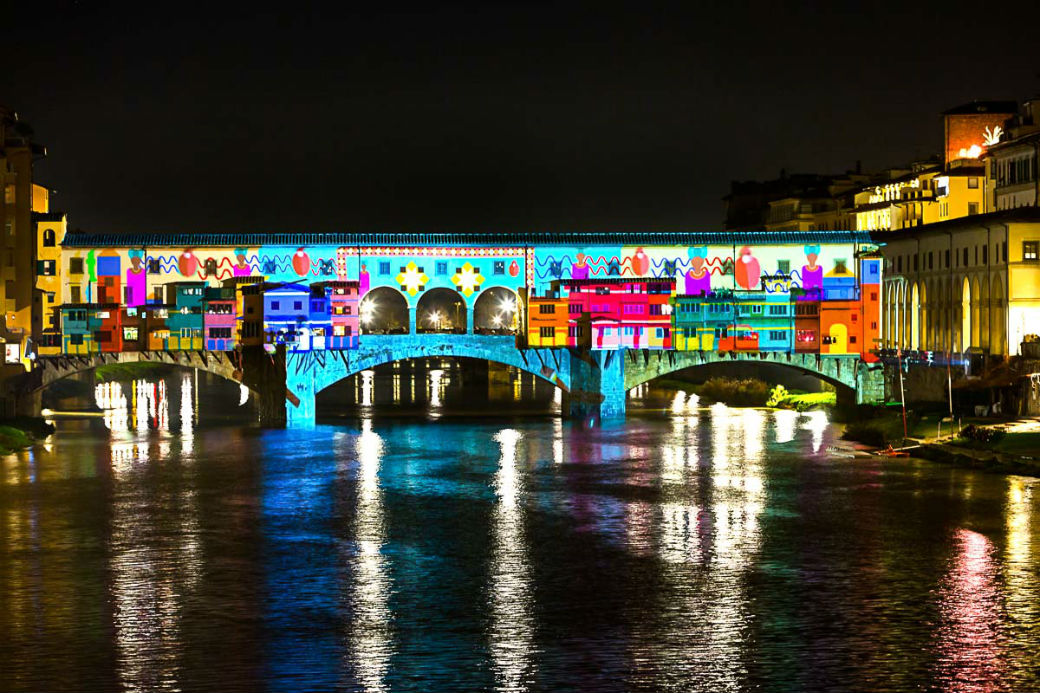 Christmas is coming and the city is ready, which means that the streets and monuments of Florence are covered with lights and colors. One of the events that is illuminating the crib of Renaissance is the F-light (Florence Light Festival), that in 2019 comes with a very special theme.

The Moon will be the star of the event, in a celebration to the landing of the man on the Moon, 50 years ago. There will be video-mapping, projections, lightshow and artistic installations, besides exhibitions, educational activities, special visits to museums, shows and cultural meetings.

At the Novecento Museum, “Lucciole per Lanterne” by Wang Yuyang, with three pictorial cycles and two light installations, is the first European solo exhibition of the Chinese artist. The Moon paintings stand out, a faithful copy of the images produced by space agencies, whose colors are the result of completely random color combinations.

At Palazzo Vecchio, the “Novecento Lunare” homage the Moon with a selection of works works by Italian artists that evoke the moon and the celestial space, including Lucio Fontana’s Spatial Concept, Reflection of the sky by Eliseo Mattiacci, Lunar surface by Giulio Turcato and La cometa by Fausto Melotti.

The Moon is not the only star of this Moon-Flight, but also the Ponte Vecchio, that will tell through images and phrases the arrival of the man on the moon. Actually, during the light show, one of the most known symbols of Florence will become the moon itself, with its craters and the famous footprints of Neil Armstrong that represented “one small step for man, one giant leap for mankind”.

And a few steps from the Ponte Vecchio, you will find the amazing lights of Via Tornabuoni, of which the Antica Torre Tornabuoni is one of the sponsors. In addition to the beautifully lighted decorations all over the road, this year there are two incredible new features: a large, bright red Christmas ball, right in Piazza Santa Trinita. Beyond being beautiful, the ball is interactive, as is the gift pack placed near the church of San Michele and Gaetano, which makes the show even more special.

The program also includes the Central Market and the Loggia del Grano, which will host an artistic installation created by a collective of Australian artists from Skunk Control.

In honor of the revolutionary astronomical discoveries of Galileo Galilei, the Piazza dei Giudici will host a double projection that will celebrate the Moon and the wonders of the Universe. On the façade of the Museo Galileo and the Chamber of Commerce a suggestive videomapping will trace the history of astronomy through splendid old images, including the Lune drawn by Galileo who first observed its appearance with a telescope.

The Moon F-light will be on until January 6th 2020 and the lights can be seen from 5.30 pm until midnight.