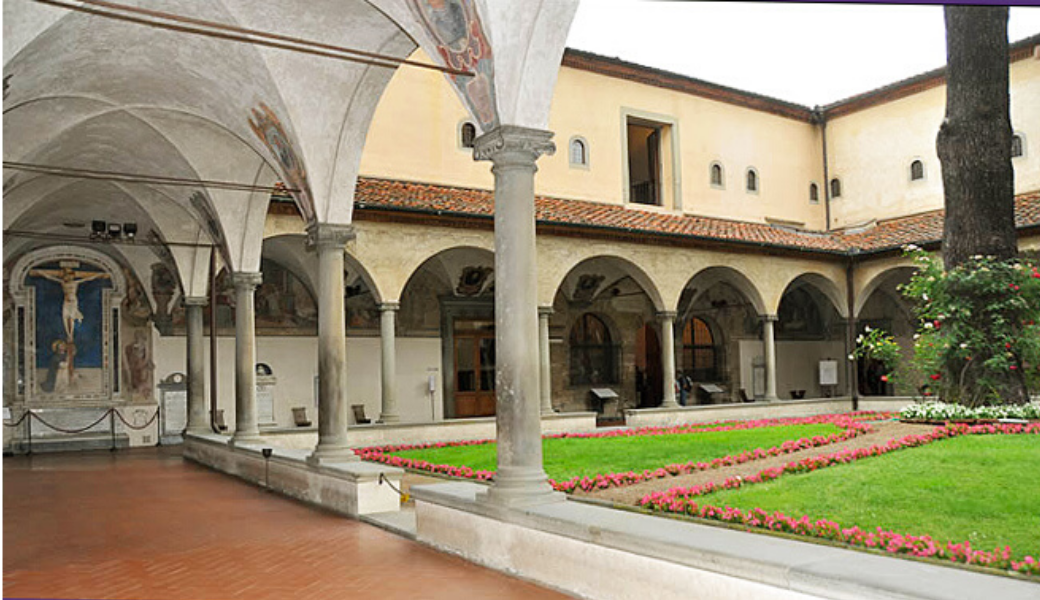 Florence has many buildings with beautiful architecture and certainly the San Marco Museum is one of the highlights in this regard. To begin with, the threshold of the cloister at the entrance of the San Marco museum leads through a path between the arcades of harmonious proportions, marked by the rhythm of the sandstone columns that ends at the San Domenico in adoration of the Crucifix by Fra Angelico, in a warm welcome of amazing beauty. In fact, the works of Beato Angelico, the painter friar who is one of the greatest artists of the early Renaissance, mark the Renaissance atmosphere, reinforced by the Renaissance architectural lines.

The building was restored between 1437 and 1446 by Michelozzo, the favorite architect of Cosimo de ‘Medici, using the pre-existing medieval convent adjacent to the church. And the Museum is made up of the oldest part of the San Marco convent building, suppressed in 1866 and proclaimed National Museum in 1869.

From the cloister, the starting point of the visit, you enter the ancient pilgrims’ hospice, where the paintings on the panel of the Angelico for churches and convents of Florence have come together: the Triptych of St. Peter the martyr, the Deposition, the Last Judgment, the ‘Armadio degli Argenti divided into 35 scenes, the Tabernacle of the Linaioli, works that reveal an educated and updated artist, master in composition and perspective, in the very personal use of color and skilled as an illuminator. The most monumental work is the magnificent Crucifixion that stands out in the nearby Chapter Room.

Other rooms adjacent to the cloister, such as the Refettorio Grande and the Lavabo room, display the works of Fra Bartolomeo, the other great painter of San Marco, who kept a workshop there until his death in 1517.

At the upper floor you will find the former friars’ dormitories, with the Annunciation on the top of the entrance staircase. It is the symbol image of the museum: a scene set in a Michelozzian loggia that opens onto a flower garden. Then, in three corridors, the 44 cells frescoed by Angelico parade, with scenes from the life and Passion of Christ. Each painting was intended for the exclusive contemplation of the friar who occupied the cell: it was not an embellishment, but an invitation to meditation on themes dear to the Dominicans, such as the bond with Christ and participation in his sufferings. These frescoes, until the nineteenth century, were in a cloistered environment and were not visible to the public.

In the third corridor there is also the Library, designed by Michelozzo as a monumental basilica with three naves, marked by columns with Ionic capitals. A temple of knowledge that Cosimo had wanted open to the public and which had a priceless book heritage.

Back to the ground floor, one of the most famous art works of the museum can be seen at the Small Refectory: the Last Supper frescoed by Ghirlandaio.

As a former Dominican convent, the San Marco Museum was the scene of fervent religious activity, highlighted by personalities such as St. Antonino Pierozzi, Bishop of Florence, the Beato Angelico (c.1400-1450) and, later, Girolamo Savonarola.

Besides being an exceptional painter, Fra’ Angelico was a Dominican monk who later became Prior of the convent.

Another Prior of the convent was Girolamo Savonarola, who preached against the decadence of customs, ending up hanged and burned in 1498 in Piazza della Signoria. It is Interesting to know that Savonarola’s death was announced by the famous bell “La Piagnona” (”the weeper”), which was named this way because of Savonarola’s followers, with reference to their complaints against the Florentines’ practices and customs. The bell can be visited at the Museum.