Via Tornabuoni: Made in Italy certified 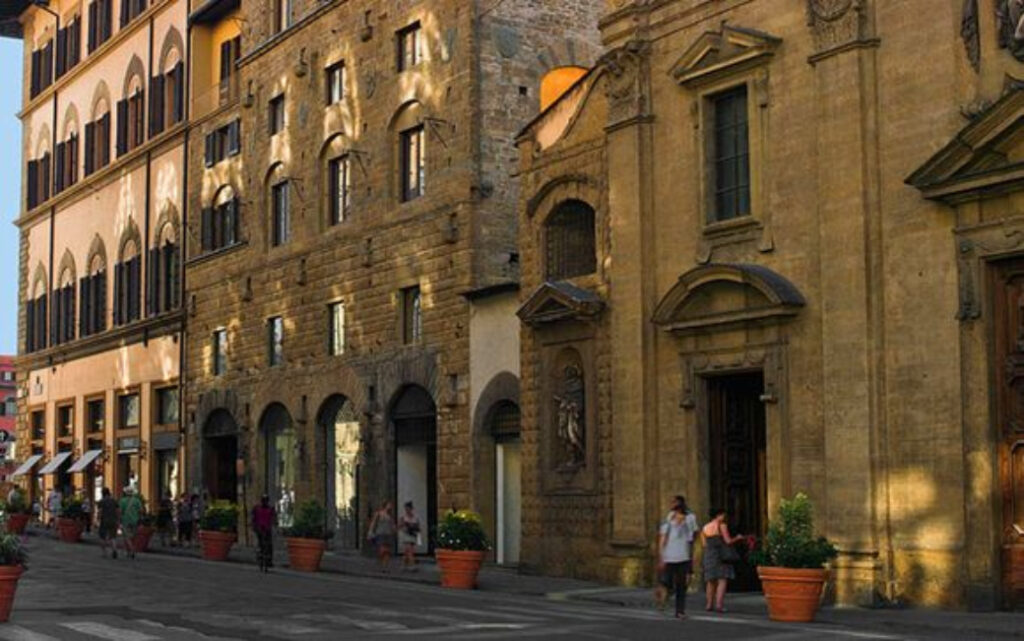 Via Tornabuoni: Made in Italy certified

There are plenty of reasons to visit Via Tornabuoni. It is certainly the fanciest street in Florence, with its world famous brands, wide sidewalks and beautiful buildings, including Palazzo Strozzi – one of the most important museums in the city and perhaps the most beautiful palace of the Florentine Renaissance -, the church of Saint Michele e Gaetano and, of course, the Palazzo Gianfigliazzi, where you find the Antica Torre Tornabuoni.

The fashionable and exclusive shopping street was not always like this though. In the past, the Roman walls passed in via de ‘Tornabuoni and during the period when the Grancontessa Matilde di Canossa reigned, the Mugnone flowed there.

Already in the 14th century the street was full of important buildings: the Spini-Feroni palace, the Gianfigliazzi tower, the Cambi-Del Nero palace. But it was the period of the fifteenth century, with the Renaissance, to consolidate the name of the street as a place of nobility, elegance and representation: the Antinori palace, Tornabuoni (by Michelozzo) and Strozzi palace were built.

Today, Via Tornabuoni is a symbol of the Made in Italy, hosting the most important Italian brands, as the first Gucci store in the world, born there in 1921. The brand is not only Italian, but also Florentine, created by Guccio Gucci. Inspired by the elegance of the English nobility and their passion for the world of hunting and horses, he specialized on leather goods and gives rise to timeless creations with beautiful collections of bags, trunks, gloves, shoes and belts. Pure luxury made with the mastery of Tuscan craftsmen.

Ferragamo is another brand that is present in Via Tornabuoni. The visionary Salvatore Ferragamo arrived in Florence from the United States and chose the city for the same reason as Gucci:  the mastery of the craftsmen and the general taste of the Florentines, who have always been surrounded by such beauty.

He opened his shop in Florence with a very successful previous store in Hollywood, California, where he became the shoemaker of the stars. In 1933 Ferragamo bought the Palazzo Spini Feroni and established the headquarters of his company there.

Today, besides the store, you can find the Ferragamo Museum at Palazzo Spini Feroni, where you will see an amazing shoe collection of several styles, the unusual materials he used – from the famous cork ‘wedge’ patented in 1936 and immediately imitated all over the world, to uppers made out of raffia, cellophane and the transparent paper used for chocolates during World War II. The collection also includes shoes that were famous because they were made for Hollywood stars like Marilyn Monroe, Greta Garbo and Audrey Hepburn.

Once in Florence, Via Tornabuoni is a must-visit to see up close the basis of what, years later, would become the Made in Italy, so well-known and valued worldwide. And nothing better than staying with us! At Antica Torre Tornabuoni you will walk every day on Via Tornabuoni to leave and come back to our property, which means that you will be able to enjoy all the luxury and beauty of this street so important for Italian fashion every single day.

To GM Maria Rita Bellini and wonderful Staff of Antica Torre ~ I am so very happy to hear that you are open and ready to welcome guests at your wonderful hotel. I envy them, knowing how they will enjoy the warm and professional service, delightfully appointed rooms, delicious breakfast and warm evenings spent on your two beautiful rooftop terraces….I see those views in my dreams and look forward to the day when I can return to my home in Firenze, the Antica Torre! Sending warmest regards from Chicago!