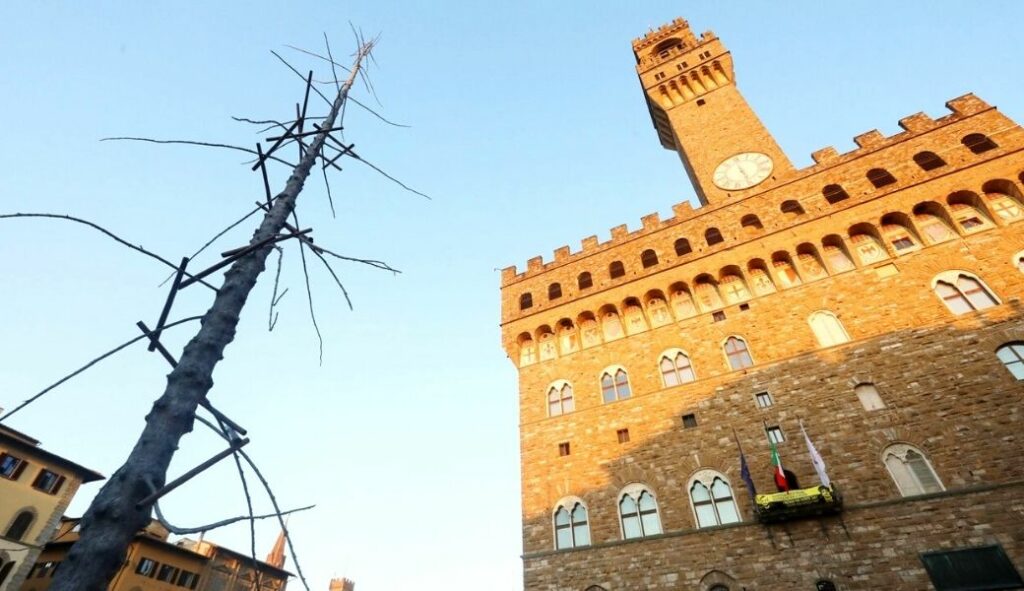 At the end of March, Piazza della Signoria welcomed a new inhabitant. The tree of “Paradise” is a gigantic fir tree of over 22 meters extending its metal branches towards the sky. The creation of Giuseppe Penone is the largest ever placed in the public space of the Florentine center.

The colossal tree can be seen as a metaphor for Paradise: that is, “the tree that lives on the top / and fruit always and never loses a leaf” (vv. 29-30, Canto XVIII, Paradiso, Divina Commedia), as Cacciaguida degli Elisei states to describe the place where it is located to the incredulous Dante.

The stupendous work is an anticipation of the exhibition “In-verse Trees” (Alberi In-Versi) with creations by the same Giuseppe Penone whose creations are dedicated to Dante Alighieri and will be hosted in the Uffizi Galleries from June 1st to September 12th. The same title alludes to the Dante theme of the “tree that lives on the top”: therefore, this border area between the corporeal and the conceptual world, between matter and idea, will refer to a series of drawings by the artist welcomed for the occasion in the gallery spaces.

Beyond Penone’s exhibition, many other events and initiatives will be taking place in Florence to the 700th anniversary of the death of Dante, specially between June and September, the months of birth and death of the Supreme Poet. The capitals, but also the smaller municipalities, will be involved in the creation and organization of events, so, if you want to be part of it, book your room at Antica Torre Tornabuoni.

If you stay in our property, you will feel inside Dante’s Divine Comedy, as the great master talks about our building many times in its pages, when he mentions the Gianfigliazzi, who owned the building where the Antica Torre Tornabuoni is placed and were one of the most important families of Florence in the 1300s.

We will be waiting for you to celebrate together the great Dante!