Reopening of museums: The Chapel of the Magi 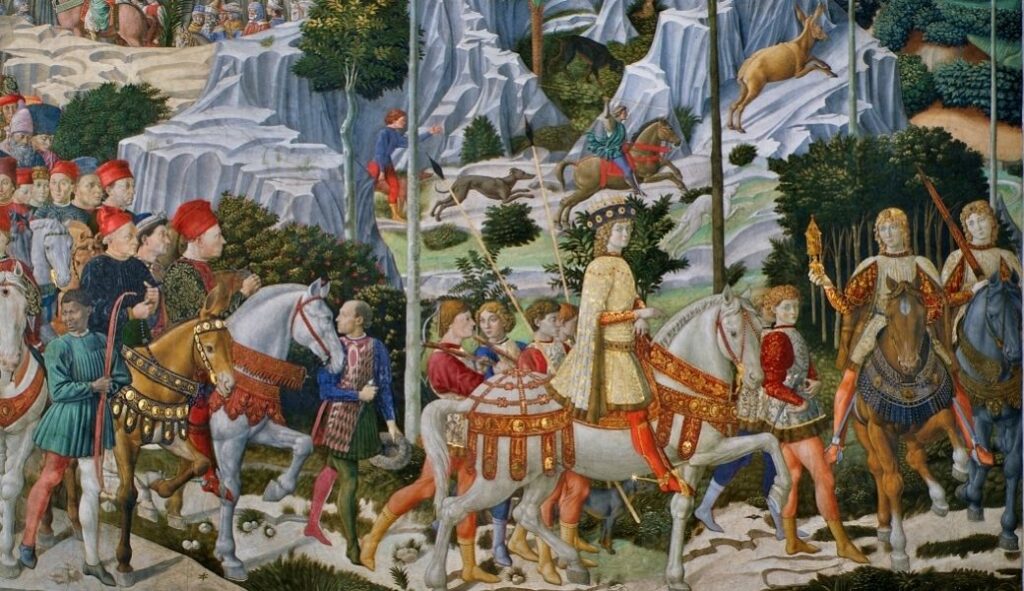 Reopening of museums: The Chapel of the Magi

The Florentine museums are open again, which means that anyone who comes to the city will have the opportunity to visit, among others, the Chapel of the Magi, inside the Palazzo Medici Riccardi. Consisting in two square rooms, a main hall and a scarsella (a particular type of church apse, with a rectangular rather than a semicircular plan), with two sacristies at the sides, the design by the architect Michelozzo di Barolomeo was inspired by the Old Sacristy of San Lorenzo built by Filippo Brunelleschi for Giovanni di Bicci, father of Cosimo the Elder.

The Medici family started the chapel’s construction in 1445, under the dynasty of Cosimo de’ Medici, “Il Vecchio”, but it was not finished until April 1459, when Cosimo the Elder received Galeazzo Maria Sforza, a scion of the Duke of Milan allied with him, in the chapel completed and fully decorated and furnished, even though it still lacked the murals.

The building is one of the first examples of Renaissance architecture in Florence, even though it still has many traditional elements such as the use of “pietra forte”, the lower “rustic” hewn stones and mullioned windows. It was the point of arrival for all the illustrious guests received by the powerful Medici.

The first private chapel in Florence hosts one of the masterpieces in town: the Cavalcade of the Magi, by Benozzo Gozzoli. The artist represented the journey of the Magi on the three walls of the main room that leads to the pouch with the altar – where there is a painting on wood (Adoration of the Child) referable to the work of Filippo Lippi (the original is placed at the Gemäldegaleriein Museum in Berlin). The fourth wall of the chapel is adorned by the “Vigil of the Shepherds awaiting the Announcement” is on the wall above the doors to the sacristies.

Among the followers of the Magi, Gozzoli portrayed numerous characters of the Medici family: Cosimo the Elder, who commissioned the work, but also his son Piero Il Gottoso and his nephews Giuliano and Lorenzo, the young man on horseback who leads the procession. Collaborators and allies, as bankers and political supporters, are also represented according to the custom of the time, such as Sigismondo Malatesta, lord of Rimini, and Galeazzo Sforza, lord of Milan. Among the many faces you can also find Gozzoli himself, whose head is turned, and his eyes looks out toward the observer.

The chapel is open for visitation. For information, reservation, and contacts, click here.