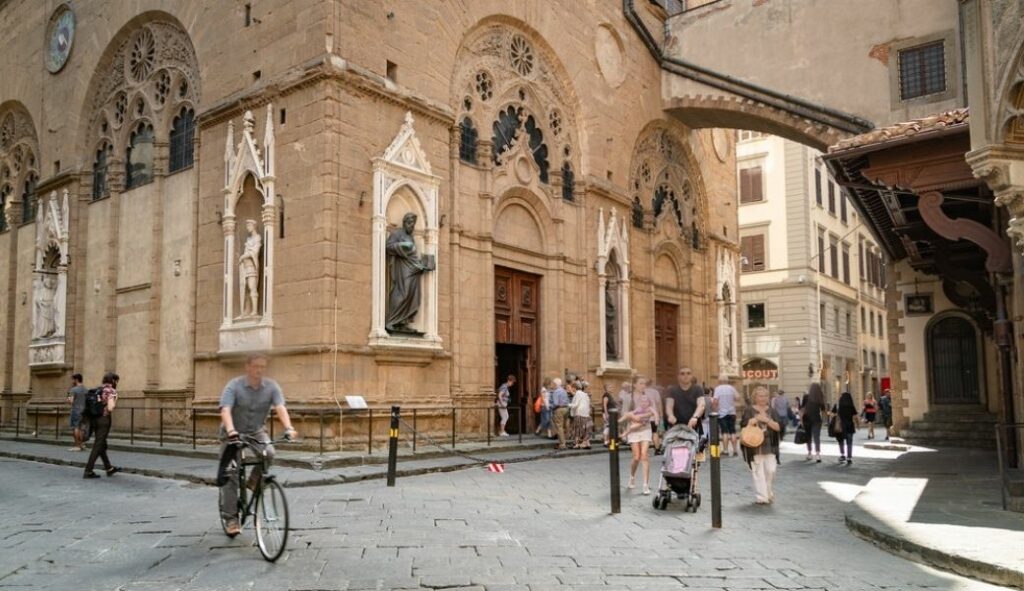 Orsanmichele: an immersion in art, architecture, and history

Orsanmichele is one of the oldest churches in Florence and, also with one of the strangest names, whose origin is very old. The 13th century oratory was dedicated to San Michele Arcangelo and was surrounded by the garden of the friars of the Benedictines’ order. That’s why the place started to be called San Michele in Orto, which over time became Orsanmichele.

In 1240, the small oratory was demolished to make way for a loggia built specifically for the grain market. It is speculated that the project was authored by Arnolfo di Cambio in 1290.

The architecture of the loggia was characterized by large arched openings to the market area where wheat, straw and grain were traded. The second floor was dedicated to offices, while the third floor housed one of the city’s municipal grain warehouses, maintained to withstand famine or siege.

How did a grain storage area turn into a house of religious worship? Within the original structure of the loggia, one of the columns contained the image of the Blessed Mother (Italian: Madonna), which was accredited with various miraculous events.

The building was made of wood and was damaged, this time by a major fire in 1304. It was rebuilt again, in 1336, as a market and grain storage area, by order of the silk workers’ union.

As you stroll across the square floor, gaze at the frescoed arches and you’ll notice large metal rings built into the ceiling, used to load and unload the heavy blocks of grain. Two of the columns on the right are actually hollow and were used to move grain between floors; the grooves through which the grain passed are still visible.

Over the years, pilgrims have entered the loggia to visit and pray in front of the Madonna, to whom several miracles have been attributed, especially during the plague of 1348. There, the image of the saint was no longer the original, damaged during the fire of 1304. A new image was painted by Bernardo Daddi: the “Madonna delle Grazie”.

By this time, with the constant influx of new worshipers, the loggia could no longer be considered a suitable place for a market; was turned into a church.

Stronghold of the great Renaissance masters

In 1339 it was decided that each of the main unions representing the workers of Florence should provide a statue of their respective patron saint to decorate the exterior of the Orsanmichele Church.

It is not known why, but luckily nothing came of it until the Renaissance was in its peak in the 15th century, which allowed commissions to be placed with the great Renaissance masters Verrocchio, Ghiberti, Donatello and Luca della Robbia.

Today, however, the sculptures seen on the facade of Orsanmichele are copies. The originals can be seen in the Museo di Orsanmichele, on the upper floors of the church. Among the most evocative works are San Matteo, by Ghiberti, protector of Arte del Cambio, and his Santo Stefano dell Arte della Lana, both in bronze. The San Marco di Donatello, protector of the Linaioli and Rigattieri, was carved in marble by the artist between 1411 and 1413. However, the masterpiece that most attracts attention is, without a doubt, the group of Incredulity of San Tommaso del Verrocchio, released to the Court of Merchandise between 1467 and 1483.

Union of civil and religious buildings

Most churches in Florence are notable for their typical architecture, but this is definitely not the case with Orsanmichele. Probably because of its unusual history, the building has a structure that unites civil and religious buildings.

It’s 3 floors that mix simple gray stone walls, intricate Gothic arches and windows, open-air alcoves with various sculptures, and even if you look for it, you won’t find a formal, regal “front” door. The entrance to the church is just around the corner at the back.

To get an idea of ​​the building’s grandeur, visit the museum. From there you will be able to appreciate its architecture, with its superb vaults and masonry. Not to mention the breathtaking view, which not only shows a panorama of Florence but also allows you to appreciate the wide variety of statues and artistic styles of the saints that once decorated the external niches.