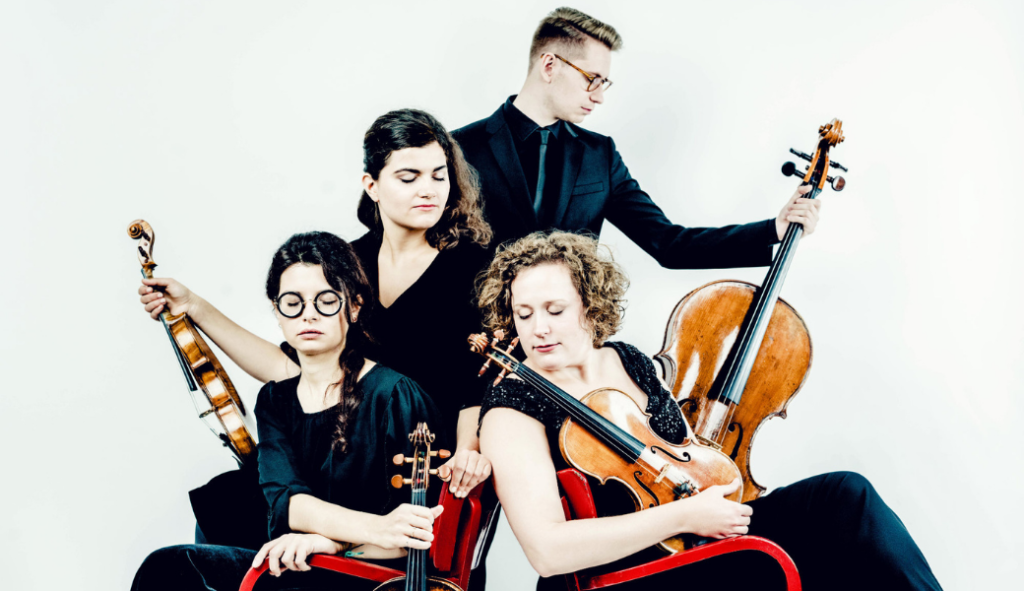 Cultural activities return to the Tower with a concert on the terrace not to be missed! Le Dimore del Quartetto organizes the Chaos String Quartet’s single performance in Tower on March 9, 2022.

Founded on the principles of the rich interdisciplinary concept of “Chaos”, the Chaos String Quartet’s members Susanne Schäffer, Eszter Kruchió, Sara Marzadori, and Bas Jongen share the conviction to explore extremes, to take risks, and to welcome the unpredictable. The Quartet embraces Chaos as the primal form of all creation through which science, art, and philosophy unite to become one Gesamtkunstwerk. Despite its relatively short existence, the Chaos String Quartet has already proved itself as one of the more exciting, independent, and innovative ensembles in tomorrow’s music scene.

Winners of the 2nd Prize and three special prizes at the 2021 Bartók World Competition and the XI. Premio V. E. Rimbotti in Italy, the Chaos String Quartet was invited to music festivals such as the Davos Festival, the Ravenna Festival, the Gent Festival van Vlaanderen, Musica Insieme Bologna, Steirisches Kammermusikfestival Graz, Beethoven Frühling Baden, the Podium Festival Mödling, the isa Festival, Musethica Zaragoza and Festival del Quartetto Firenze. At the 65th Jeunesses Musicales International Chamber Music Campus Weikersheim they were awarded the prize for the most promising newcomer ensemble 2020, which includes an invitation to the Heidelberger Streichquartettfest 2023.

Here is the program of the concert in Tower:

After the concert, the public will be invited to a theme aperitif including a flute of Prosecco and canapés prepared by our chef. Reservations are required and can be made by calling (+39) 0552658161 or by email: info@tornabuoni1.com.