The Antica Torre Tornabuoni and the Divine Comedy 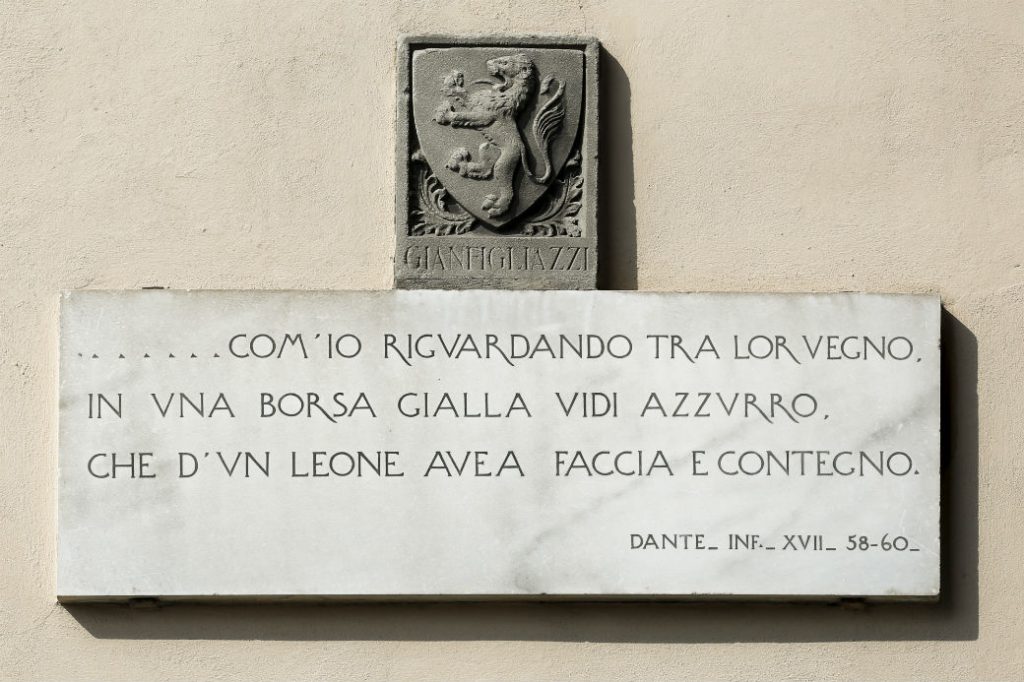 The Antica Torre Tornabuoni and the Divine Comedy

Did you know that the Antica Torre Tornabuoni was the scenery of an important part of the history of Florence? The building belonged to one of the most important families of Florence in the 1300s, the Gianfigliazzi, so much “famous” that it was mentioned in the Divine Comedy by Dante Alighieri, in Inferno, Canto XVII – (The usurers).

For those who do not know it, or do not remember the details, here is the topic of Canto:

When the two reach Gerione, Dante notes that not far away there are some damned (usurers) sitting in the fiery sand, near the extreme rim of the Circle. Virgilio invites Dante to go alone to observe these sinners, recommending him to be swift while he will try to convince Gerione to carry them on his back in the bottom of the ravine.

Dante then proceeds alone to the rim of the Circle to the usurers, who cry for pain and use their hands to protect themselves from flames and sand, just as dogs do in summer with snouts and legs to defend themselves from flies and others annoying insects. Dante observes the damned without recognizing any, but sees that each of them wears a bag with the emblem of their family on his neck, that every spirit does not stop looking. The poet sees a sinner whose bag bears the emblem of a blue lion on a yellow background (the Gianfigliazzi), while another has a purse bearing a white goose in a red field (the Obriachi).

Dante also sees another moneylender, whose bag has a blue sow on a white field (Reginaldo Scrovegni), who addresses him asking him what he does in Hell when he is alive and inviting him to leave. The damned also predicts the future damnation of the Paduan Vitaliano del Dente and the Florentine Giovanni di Buiamonte, as indeed do the other damned Florentines who are with him. At the end of the speech he pulls out his tongue, like an ox licking his nose.

Here the exact citation about The Tower:

“And when, amongst them, looking round I came,

A yellow purse 3 I saw with azure wrought,

That wore a lion’s countenance and port.”

As mentioned in the plaque on the façade that you can admire on the right of the entrance door – it is part of the 34 tombstones of the Divine Comedy with which Florence pays tribute to the Great Poet.

And as I looked among them, I saw on a yellow bag a blue figure that looked like a lion with an appearance and bearing (the coat of arms of the Gianfigliazzi).

The Gianfigliazzi family died out in 1764 with Canonico Rinaldo of Lodovico whose tomb can be visited at the Basilica of Santa Trinita located next to the Antica Torre Tornabuoni in Piazza Santa Trinita. In the early 1900s the building housed the Pensione Piccioli and soon became a privileged residence for British aristocrats, literati, artists and musicians.

Thanks to careful restoration which has safeguarded the building’s charm and architectural heritage, the evocative ambience of the Via Tornabuoni palace has regained life and warmth. Our two glorious rooftop terraces offer a unique view: the main one guarantees an unbeatable view of the Cathedral of Santa Maria del Fiore and the hills of Fiesole and the second one faces the Arno River and the great monuments of the Oltrarno.

Today Antica Torre di Via Tornabuoni 1 is not a boutique hotel but a historic mansion where guests can relive, not as spectors but as protagonists, an authentic moment of the history of Florence and of the Italian language.

Thank you so much for the fascinating story about the family origins and the Dante connections of Antica Torre. It seems as if loving Dante’s Inferno and loving the hotel
make perfect sense together!

I will always remember hearing this story during our meeting inside the elevator of the hotel. Dante has a special place in my heart, and Florence has for decades. After our visit, Antica Torre joins the city and the poet in my heart. Such a special place, such beautiful memories! Thank you for truly making your guests feel at home in Florence!

5 places to visit in Florence when normal life returns Reply

[…] noble family (which died out in the 17th century)  and preserves the renaissance palaces as Palazzo Gianfigliazzi – the Antica Torre’s building –, the Palazzo Antinori (1461–69), owned by the aristocratic […]

Via Tornabuoni: the fashion street Made in Italy certified Reply

[…] palace of the Florentine Renaissance -, the church of Saint Michele e Gaetano and, of course, the Palazzo Gianfigliazzi, where you find the Antica Torre […]