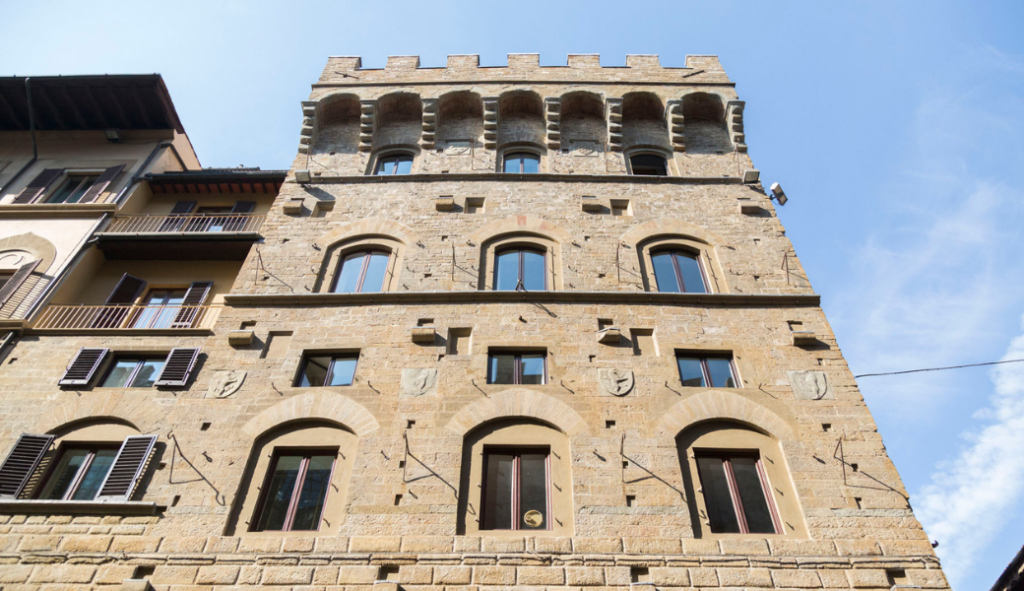 The address Via di Tornabuoni, 1 does not change, but the name of the building that now houses the Antica Torre Tornabuoni does. As we have already told you here, the building, as well as the neighbors of Via Tornabuoni and Lungarno, was part of the Gianfigliazzi family’s assets. In the 18th century, the Academy of Nobles operated there. The historical-cultural institution born in Florence around 1623 grew into, over the centuries, an institute of youth education and developed several artistic and cultural activities, until it became a true Academy, as it is recognized today. In 1764, the building was inherited by the Piccioli di Fontebuoni, after the extinction of the Gianfigliazzi family.

The current building, of eighteenth-century shapes, has a four-axis facade in Lungarno and five in the street, with a third floor that dates back to an addition of the 19th century. In the same period, the ground floor was unified with that of the adjacent Gianfigliazzi tower, to be used for commercial purposes, which is still maintained today and houses major brands in the fashion world, such as Ermenegildo Zegna and Dior.

From pension to historical residence

During the early nineteenth century the tower was used by the Accademia dei Nobili and in 1841 the crowning with battlements and corbels was rebuilt in imitation of the Palazzo Spini Feroni which is located in front of it. In that same period the floors were thickened and new rows of rectangular windows were opened. From the early 1900s the building was the seat of the Pensione Piccioli, becoming a privileged residence for English aristocrats and writers.

After the Great War, Pensione Piccioli reopened in 2001 as our Antica Torre Tornabuoni, a historical residence where you can live history, admire one of the most beautiful panoramas in Florence and enjoy your stay in the city with all the luxury and warmth that you deserve.

When you stay with us, be sure to admire the facade of our building, lined with square stones on a regular basis, which reach the frame of the first floor, while the upper levels have the simplest “filaretto”, a medieval masonry. Look for the four Gianfigliazzi coats of arms with the rampant lion and the old hooks, used to tie horses and support torches and banners. From the door in, we will take care of everything and promise to make your trip to Florence simply unforgettable.