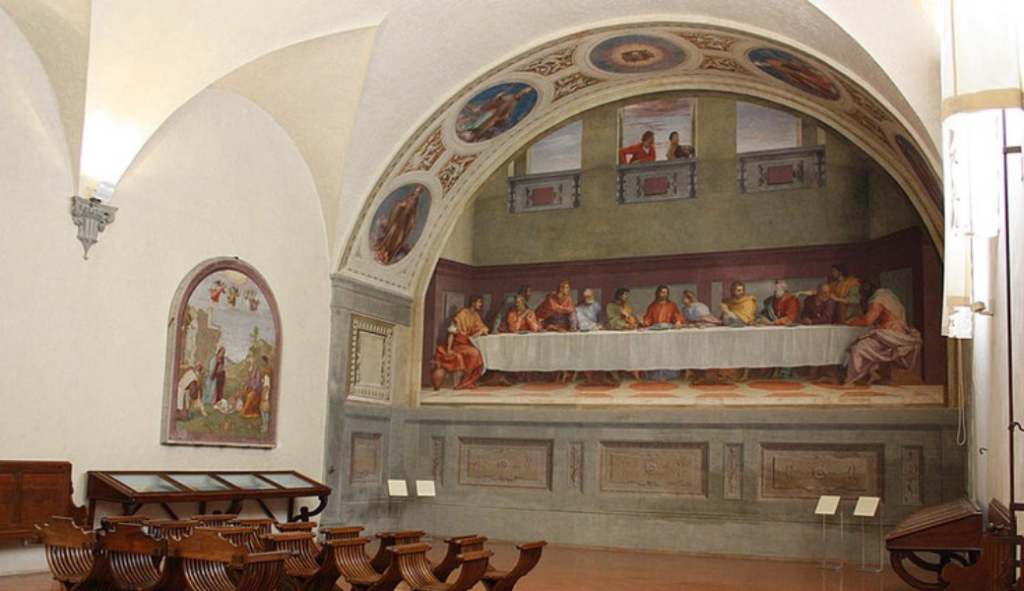 It’s no secret that Florence is a city full of mysticism, with countless churches, temples and monasteries. One of these destinations is the Cenacolo di San Salvi, a monastery founded in 1048, when St. Giangualbert, of the order of Benedictine Vallombrosan monks, dedicated it to St. Michael in San Salvi.

The Abbey was expanded and restored in the early 16th century, under the direction of Biagio Milanesi and later the abbot Ilario Panichi. The grandiose expansion project involved the construction of the south portico of the loggia, the kitchen, the lavatory room and the refectory, where in 1511 Andrea del Sarto performed the fresco with the Last Supper, completed in 1526.

The artist was inspired by Leonardo da Vinci’s Last Supper to carry out the work in which he captures the apostles when they receive the announcement of Jesus’ betrayal. At the top, a picturesque addition by the painter: a perfectly foreshortened balcony where two characters, surrounded by the light of sunset, are actually looking in on the Last Supper.

Colors are vivid and bright with unusual iridescent effects reminiscent of Shantung silk: purple, orange, turquoise and green in Judah’s soft clothes. The skillful use of light and shadow gives the fabrics the idea of ​​movement and adds plasticity to each figure.

The work generated a stir since its inauguration and gave rise to the legend told by Benedetto Varchi, according to which the surrounding Imperial forces of Emperor Charles V were so fascinated by its modernity and beuaty that they intentionally preserved it from destruction.

The decoration of the lower part of the vault dates from 1511, for which Andrea di Cosimo Feltrini and probably Franciabigio collaborated with the grotesques. It portrays San Giovanni Gualberto, San Salvi, the Trinity (in the center), San Bernardino degli Uberti and San Benedetto.

In the museum tour carried out in the convent rooms, in the hallway, in the kitchen, in the toilet, in the refectory, paintings from the 16th century are exhibited, which document the Florentine painting of the time with excellent examples. Among these works by Pontormo, Franciabigio, Raffaellino del Garbo, Bachiacca, Carlo Portelli, Bernardino Poccetti, and a group of paintings by Plautilla Nelli (1524–1588) one of the rare artists mentioned by Giorgio Vasari in the book Lives.