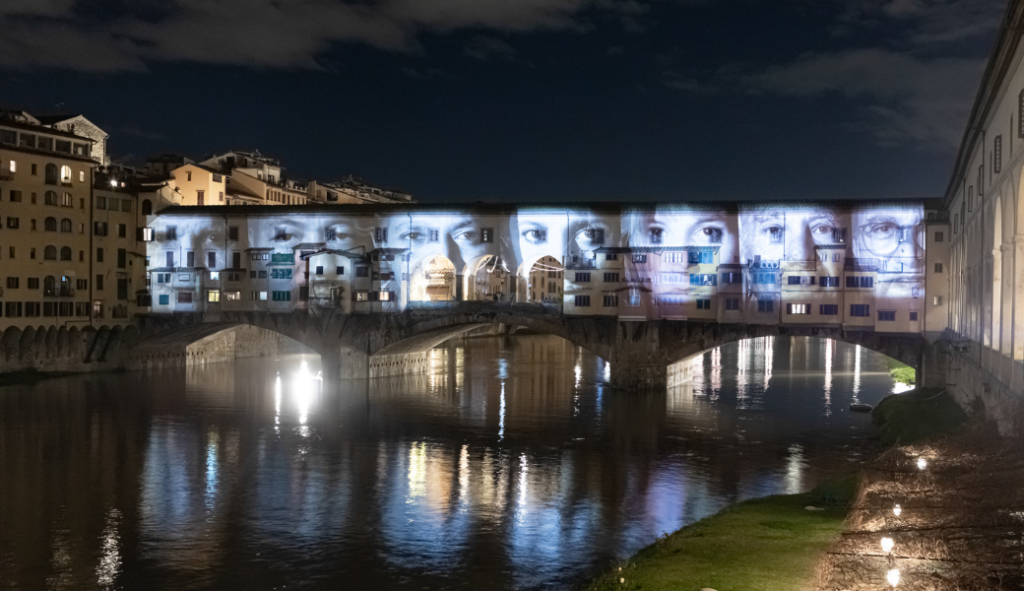 Until January 9 2022 Florence will shine! Thanks to F-Light – Firenze Light Festival the city will be set up with light and artistic installations, projections, plays of lights, evocative lighting of buildings, squares and monuments.

This years’ edition is called “Reflections. Where we are, where we will go” on an invitation to reflect and mirror ourselves to get to know and recognize ourselves together with others. The theme is most impactful at Ponte Vecchio, where a monumental projection transforms the iconic Florentine symbol in a mural of faces.

At the end of Dante’s year, the projections on the facade of the Galileo Museum and the Chamber of Commerce will propose a vision of the Divine Comedy as a mirror of the human condition, while the installation on the side of the Basilica of San Lorenzo will see a collage of stylistic features that unfolds between the past of myths such as “Narcissus” and a reflection linked to contemporaneity.

On the facade of the Istituto degli Innocenti, in Piazza Santissima Annunziata, an installation that symbolically represents man’s ability to poetically exploit big data and the computational flows of artificial intelligence.

Other city points will light up in this period, as the loggia of the Museo Novecento, the facade of the building of the Forte Belvedere, the Torre della Zecca, the Basilica of San Miniato al Monte, the Rampe di Giuseppe Poggi, and all the doors and towers that surround the center.

We cannot forget the traditional Christmas trees: one at Palazzo Vecchio and another at Palazzo Medici Riccardi. In line with the festival’s theme, their branches will offer a cluster of reflections, also inspired by the architecture of the two buildings: in Palazzo Medici Riccardi the decorations will resemble Renaissance motifs, while in Palazzo Vecchio they will bring to life a kaleidoscope of sparkles and lights.

The festival offers again this year an opportunity of visiting the civic Florentine museums in a different perspective: in torchlight. The program of this and the other initiatives is available on https://www.flightfirenze.it/. The festival is on every day, from 5:30 pm to midnight.

Christmas is coming in Florence! Reply

[…] Via Tornabuoni, where our property is located, is a must for anyone who wants to experience the Christmas atmosphere and experience all the magic of this time of year in Florence. Enjoy the stupendous view from our rooftop to have a 360-degree view of the illuminated city, including the projections that are traditionally made on Ponte Vecchio. […]