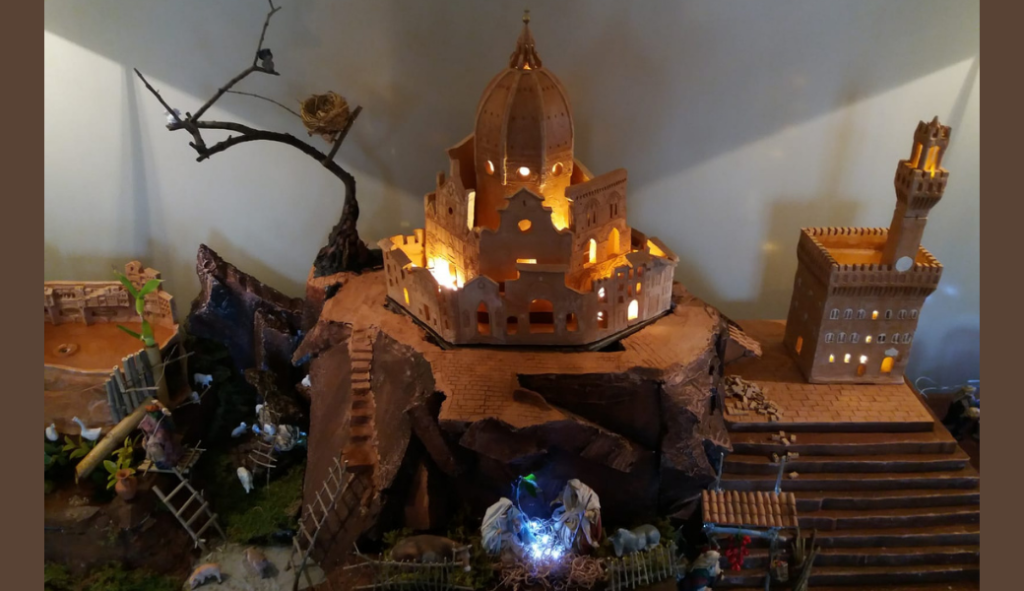 The artistic nativity scene of the Antica Torre Tornabuoni

Every year, since 2016, the magic of Christmas invades the Antica Torre Tornabuoni through our nativity scene. Created by our F&B manager, Dandy Robosa, who is also a talented all-round artist: at Christmas he surpasses himself and gives us an atmosphere of beauty, hospitality, and love, in the best Christmas spirit.

We interviewed Dandy to find out more about his creative process and what we can find in this year’s nativity scene. Here’s what he told us!

Antica Torre – Since when do you create the nativity scenes in the Tower?

Dandy – I started creating the nativity scenes in 2016, the year after the siege of the Charlie Hebdo headquarters in France, because we felt the desire to return to the more traditional origins of Christmas and the nativity scene represents one of its strongest symbols.

AT- What’s different about this year’s nativity scene?

D- In the past, to create a nativity scene like the others I used only traditional materials such as cork, branches, moss etc., while last year I started adding a small Florentine citadel in terracotta with the main monuments of Florence with the dome of the Duomo, the Church of Santo Spirito, Santa Croce, Orsanmichele, Santa Maria Novella and the small houses around the city. This year I added two other great important monuments: Palazzo Vecchio and Ponte Vecchio where the water literally flows under the bridge and crosses the city. I use different materials, it is a mixed-media that symbolizes unity through diversity.

AT- What are your inspirations for creating nativity scenes?

AT- How long does it take to make a nativity scene like the one in the Tower?

D- It takes a year to plan the project but a week to make it happen, in fact, I have already started planning the nativity scene for next year.

AT- What’s your favorite piece from this year’s nativity scene?

D- “The fisherman”: one of the most important characters that is rarely found in the traditional nativity scene and that for the first time has been added to ours. For me he has a great role in the history of Christianity, and he should always be present in the nativity scene, besides the shepherd and the Holy Family.