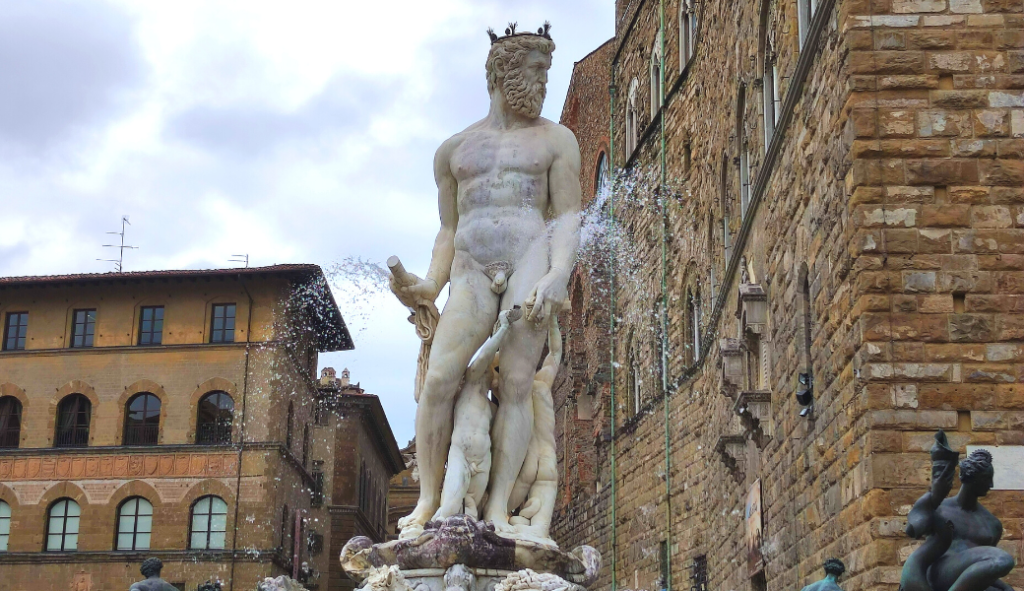 10 Florentine fountains you must visit

Did you know that Florence has over 100 fountains to visit? Obviously, we won’t be able to talk about them all here, but we’ve selected the 10 most interesting ones, which you can’t miss.

Made by Bartolomeo Ammannati and by Giambologna, it was built between the years 1563-1565 on the occasion of the inauguration of a new aqueduct and also known as Biancone, for the whiteness of the marble used.

Standing in the center is Neptune, with physiognomic features inspired by those of Cosimo I, an allusion to the maritime successes of Florence achieved during his government.

Where to find it: Piazza della Signoria

Located on the edge of the loggia of the Market that stands in the homonymous square, the Porcellino Fountain is the famous pig bronze statue which nose touching is said to bring good luck.

The complete procedure to obtain a good omen would consist in putting a coin in the pig’s mouth after having rubbed its nose: if the coin falls past the grate where the water falls it will bring luck, otherwise it will not.

Where to find it: Porcellino Square

The Fountain of the Artichoke, was built by the Florentine sculptor Giovan Francesco Susini and assistants, as part of the works for the Boboli Gardens commissioned by Grand Duke Ferdinand II.

The Fountain represents both a late homage to Florentine sculptural Mannerism and a rare and evocative local example of moderate adherence to the Baroque current.

“Pluie – La pioggia” is a statue by the Belgian sculptor Jean Michel Folon. The work is about three meters high and represents a man who takes shelter with an umbrella made of water.

Where to find it: at the roundabout in front of the Tuscany Hall

Located in a narrow corner below a private terrace of the Casa dei Frescobaldi, it is one of the most famous and elegant public fountains in the city, among the most beautiful in the Oltrarno district.

A spur indicates a corner formed by two streets that intersect at an acute angle, so the building that is included has a trapezoidal shape.

Where to find it: Via dello Sprone, 20

Already identifiable as present in the plan by Stefano Bonsignori (1584), the fountain was the subject of a commission aimed at making it of greater value entrusted to Pietro Tacca by the Medici family in 1609, which however did not succeed.

Still incomplete in 1639 when it was rearranged with reused material, it was the subject of new and definitive works in 1673 based on a project by the architect Pier Maria Baldi, who gave it its current shape using “pietra serena” as a material.

Where to find it: On the opposite side of the basilica of Santa Croce, along the axis of via de ‘Benci and via Giuseppe Verdi and in front of the Cocchi Serristori palace.

The fountain was born following the demolition of the large wash house of the Arte della Lana, of which traces remain in the toponymy of via dei Lavatoi, together with the construction of the Teatro Verdi, on the same ground.

After being destroyed during the Second World War, it was rebuilt in the mid-fifties of the twentieth century by Tosetti on the initiative of the City Aesthetics Committee, consisting of an aedicule in “pietra serena” with a small basin, into which a bronze head of a lamb, bent downwards, threw water (the fountain is extinguished for many years now).

Where to find it: Via dei Lavatoi, at the corner of via Isola delle Stinche and overlooking piazza San Simone, on the building of Teatro Verdi.

Initially commissioned to Pietro Tacca in 1626 as further decorative elements of the port of Livorno, the two fountains were brought to Florence in 1641, placed on the sides of the square of the Santissima Annunziata.

Of these two sources, masterpieces of Mannerist sculpture of rare beauty, fresh workmanship and formal balance, the evident naturalistic novelty of the marine elements immediately struck (shells, fish, imaginary monsters, garlands with crustaceans and algae, masks), which came out of the canons of the traditional maritime and fluvial symbology then prevailed.

Where to find them: Piazza Santissima Annunziata

The work of Giambologna consists of a large basin surrounded by water, connected to the ground by two walkways, at the entrances of which there are two wrought iron gates supported by two columns, at the top there are two capricorns.

In the center stands the statue of Neptune, surrounded by lying river deities representing the Nile, the Ganges and the Euphrates, who symbolically pour their waters into the large basin, which represents the Ocean. The basin is made of granite from the Island of Elba, with a base enriched with bas-reliefs.

A work attributed to the sculptor Giovanni Battista Lorenzi, it consists of an oval-shaped basin with a white marble cup surmounted by the sixteenth-century marble group of Ganymede with the Eagle.